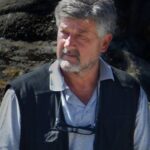 Born in 1956 in the town of Leskovac in Serbia. Lives In Bor.  By profession Economist. He has been engaged in photography since 1970.

He holds the distinctions of PPSA , EFIAP and F1FSS.