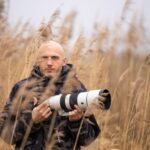 Petar Sabol Sharpeye was born in 1981 in Čakovec. He started photography in 2007. and specialises in nature photography, especially macro - drawing the viewer in and showing the world of animals invisible to the naked eye. His photographic images depict and evoke moments from the life of nature that are difficult or almost impossible for most people to see in reality due to the growing alienation from nature.

Thanks to devoted and very systematic work, he captures incredible shots in which the main compositional ingredient is beautiful natural light. By idealising the beauty of nature, he stands on his solid positive attitude towards the beauty and wonders of nature. Since 2012, he has participated in many international exhibitions of artistic photography under the high patronage of the FIAP (Federation Internationale de l'Art Photographique) for 344 times, winning 444 times (228 medals and 216 honourable mentions for 114 different art works) in more than 40 countries and has been named the best author of an international salon 7 times and awarded the FIAP blue badge.

He has also participated in international exhibitions under the patronage of the PSA (Photographic Society of America) where he was also rewarded many times. He has been recognised in other specialised photographic competitions around the world and his total number of awards surpasses 600.

In addition to nature, he also professionally photographs occasions such as weddings, various celebrations and public events, commercial photography. countries He has also participated in international exhibitions under the auspices of the PSA (Photographic Society of America) where he has also been awarded many times. He has also been awarded at other specialized photography competitions around the world. The total number of awards exceeds 600. He holds the honorary photographic title of MFIAP, EFIAP / Diamond1, EPSA. MPIPC,  Hon.Adv.NPS, Hon.FTPAS, GAPS, FAPU.

His famous photograph "Natural abstract" was awarded the FIAP gold medal in the Macro category at the 7th Salon of Photography in the United Arab Emirates 2012/116 and is permanently stored in the National Library in Paris. That photo was also among the top 10 at the Sony World Photography Awards in 2012. In that competition, he is the winner in the National Award category for 2016, where he placed in the top 50 with another photo of himself. The following 2017, he repeated his success for the second year in a row in the same competition with photography "Swirl". In the following 2018, he repeated his success for the third time in a row and won first place in the National Award category, placing the winning photo 'Beeaters' or 'Beekeeper' in the top 10 in the wildlife category. At www.fotowedstrijd.eu he won the first prize in the macro category with the photo "Only love matters" in 2014.

For five years in a row he was awarded at the American National Insect Salon under the patronage of PSA, of which he twice won the PSA gold medal for best salon author. He has won first places three times in a row in 2014, 2016, 2018 for his macro photographs at National Insect Week in England, which is held every other year with an exhibition at the Royal Entomological Museum. He won second prize in the wildlife" category at the Siena International Photography Awards 2015, the crystal Pangea trophy.

He also won first prize at the 1x Photo Awards 2015 with the photo ‘The kingfisher’ where the jury was National Geographic editor Kim Hubbard. In March 2017, he won second prize at the HIPA competition (Hamdan Bin Mohammed Bin Rashid Al Maktoum International Photography Award) in the open color category as part of the 6th season of "The Challenge" in Dubai.

In January 2018, he was invited as a guest of honor at the 5th anniversary of the IUP (International Union of Photographers) in Guangzhou, China, where he was promoted to IUP representative for Croatia and was awarded with trophy for achievement in the art of photography along with 5 medals and 7 honorable mentions  at the same event, circuit exhibition for his photographs.

In February 2018, he became a member of ULUPUH (Croatian Association of Fine Artists of Applied Arts). In February 2018, he won second place at IGPOTY (International Garden Photographer of The Year) with the photo ‘Macro wonderland’ in the ‘Widlife in garden’ category. At the same competition in July 2018, he won 1st place in the 12th edition of IGPOTY in the Macro Art category with the photo 'Mayflies' and was praised for two more photos. In May 2018, he was awarded the prestigious and one of the most significant Croatian awards for photography, 'Tošo Dabac', and he is the youngest author to have been awarded so far. In September 2018, he was invited to celebrate the 3rd World Exhibition of Chinese Photography in Guangxi where he received an honorary certificate and was promoted to Ambassador of International Cultural and Photographic Exchange. In October 2018, he won the EEA (European Environment Agency) Waterpix photo competition with his photo ‘The kingfisher’. In November 2018, he won 2nd place at XPOSURE 2018 in Sharjah, UAE, in the macro category with the photo ‘Robberfly’. In December 2018, he won 2nd place at the Malta International Photo Award with ‘Up and Down’ photography in the ‘Nature’ category.

In April 2019, he won the 'Zrinski' award for 2018 awarded by the County of Međimurje for his outstanding results in photography and the promotion of Međimurje and its natural beauties. At the 13th Black & White competition organized by IGPOTY (International Garden Photographer of The Year) was awarded 1st place for photography 'Night butterfly'. In May 2019, he repeated the success of  2015 and placed the photo ‘Snow sparks’ in the top 6 in the ‘Winged life’ category exhibited at the California Academy of Sciences in San Francisco.

At the CEWE Photo Award 2019, one of the biggest photo competitions, he placed his photo ‘Woohoo’ among the top 20 out of a total of 448,152 entries and 45,460 entrants. In November 2019, he received the title of GAPS (Genius Agile Photographic Society) in Bangladesh. In May 2020, he became a member of the Photographic Association of Asia (APU). In August 2020, he becomes the holder of the honorary title of Hon. F TPAS (Honorary Fellowship Tricity Photo Art Society) in India. In September 2020, he received the honorary title of Hon.MPIPC from Egypt for his contribution to the field of international art photography.

In September 2020, he became an honorary advisor to the NPS (Nature Photographic Society) in Hong Kong.

In less than four years, Petar Sabol became the most awarded Croatian photographer. His works have been published in many journals (National Geographic, Mirror, Telegraph, The Sun, The Dailymail, Meridians). So far, he has exhibited 10 times on his own. At the end of 2014, he presented his first solo exhibition Butterflies in Zagreb. Kingfisher had his second solo exhibition in April 2016 in the city of Negova in Slovenia under the high patronage of FIAP, in one of the then six world-renowned exhibition centers of FIAP.  ‘The Kingfisher’ presented its third solo exhibition in Bor, Serbia, in early October 2016.

He presented his fourth solo exhibition, ‘Creative Macrophotography’, at the Aquatika Public Institution, a freshwater aquarium in Karlovac.

With collaboration with Davor Žerjav, he published book about Macro photography, ‘Creative macrophotography’.

In May 2018, as part of the ‘Tošo Dabac’ award ceremony, he opened his fifth solo exhibition ‘Landscapes’.

He is a regular member of the jury at international exhibitions and photo competitions and is Sony Europe Imaging Ambassador of Croatia.